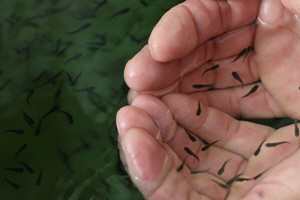 As a natural predator of mosquito larvae, mosquitofish have been used for mosquito control purposes throughout the world for many years. More than 100,000 of these fish are produced each year at the Contra Costa Mosquito Vector Control District's mosquitofish production facility. These fish are routinely stocked by technicians to control mosquito populations throughout the County. By law, only vector control technicians can place fish in water sources other than those located on private property. Some common 'sources' or sites where these fish are stocked include; artificial lakes, irrigation ditches, storm channels, and natural industrial ponds.

To avoid competition with sensitive native amphibian and fish species we do not stock mosquitofish in habitats where such species are known to be present.